This post may contain affiliate links. I may earn a small commission when you click the links at no additional cost to you.

Smoked Cinnamon Rolls combine a simply store bought favorite with pantry staples to create a smoked breakfast everyone will love.

There is something special about waking up before your family and making breakfast. Maybe it’s because I can remember being woken up by smells of bacon and biscuits when I was a child. Either way, I love it now and I loved it then.

Almost like Sunday pancakes, smoked breakfast has become something everyone in our home looks forward to. I enjoy getting outside first thing in the morning to fire the smoker up. My kids enjoy coming downstairs and heling me get the table ready before they dive head first into morning cartoons.

We made these smoked cinnamon rolls this weekend and it has been everyone’s favorite thus far.

Try these other smoked breakfast recipes!

Sausage Gravy On The Smoker

While these cinnamon rolls are not technically homemade, they definitely could pass for it. The butter, the brown sugar and the crushed pecans take store bought to a WHOLE NEW LEVEL. There is also something to be said about cooking these in a cast iron skillet.

We recently purchased our first cast iron skillet ever and have been finding ways to use it ever since. My mom always cooked with her cast iron and it had so many years of use that the flavor and seasonings that came through were unmatched. While we use the smoker for this recipe, you can make these cast iron cinnamon rolls in your oven as well. You won’t get to experience the smoky flavor that you would get from your smoker, but they still are pretty delicious.

This is the cast iron skillet we purchased. We also bought one in a smaller size, found here, that we plan to use for dips and other special treats to share.

How To Make Smoked Cinnamon Rolls

This recipe really is simple and delivers. The smell isn’t better than the taste, they are both equally drool-worthy.

To start, gather all your ingredients. This includes 1 stick of unsalted butter, 1 cup of brown sugar, 1 cup of crushed pecans and 2 packs of Pillsbury Grands Cinnamon Rolls.

Crushed pecans are probably not something you keep stashed in your pantry. However, any pecans will do. Place your pecans in a baggy and use a mallet to crush until you have enough for 1 cup. Feel free to go a little overboard with the pecans. As a minimum, you should plan for 1 cup.

First, melt your butter in the microwave and pour in your cast iron skillet. You can also place the butter directly in the pan and melt over the stove top to ensure you cast iron skillet is evenly heated before placing on your smoker.

Next, using your hand, add the brown sugar to the skillet being sure to spread evenly throughout the pan. Now, do the same with the crushed pecans.

Time to add the cinnamon rolls to your skillet! Pop both packs open and place on top of the butter, brown sugar and pecans. They will need to touch but they do not need to be tight against one-another.

Once your cinnamon rolls are on the skillet, pop it in the smoker for 30 to 35 minutes. Before you remove, be sure to check that they are done. Use a fork to poke the middle cinnamon roll.

Grab a plate large enough to cover the cast iron skillet and flip it over. This may take 2 sets of hands because the skillet cinnamon rolls are pretty heavy.

Now that the hard part is over, drizzle the icing packs over the smoked cinnamon rolls and enjoy!

Before We Get Started

Be sure to sign up for our newsletter so you don’t miss what’s next. We’re working on long over night recipes that are perfect for back yard get togethers and simpler recipes like our brand new Smoked S’mores Brownie recipe. If we can dream it, we’ll be sharing it with you!

You can find our link to sign up to the right of this post. We promise, we won’t spam you. Our goal is to start sending a monthly newsletter out in November of 2022 sharing all of our new creations with all the smoke lovers out there. 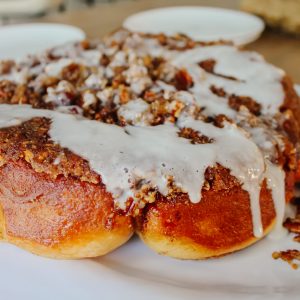 We hope you love this smoked breakfast item as much as our family does. While it’s not the healthiest option to make for your loved ones, it’s definitely one to use on special occasions.

As you are using your cast iron skillet for our recipe, we feel the need to remind you of proper care for your skillet. When you start to clean up your meal, wash your skillet with warm water and dawn dish soap. Next, towel dry your skillet when you are finished and then throw in the oven for about 15 minutes at 200 degrees to dry. This step is important to ensure your cast iron doesn’t rust.

Pin this image so you can easily find later. 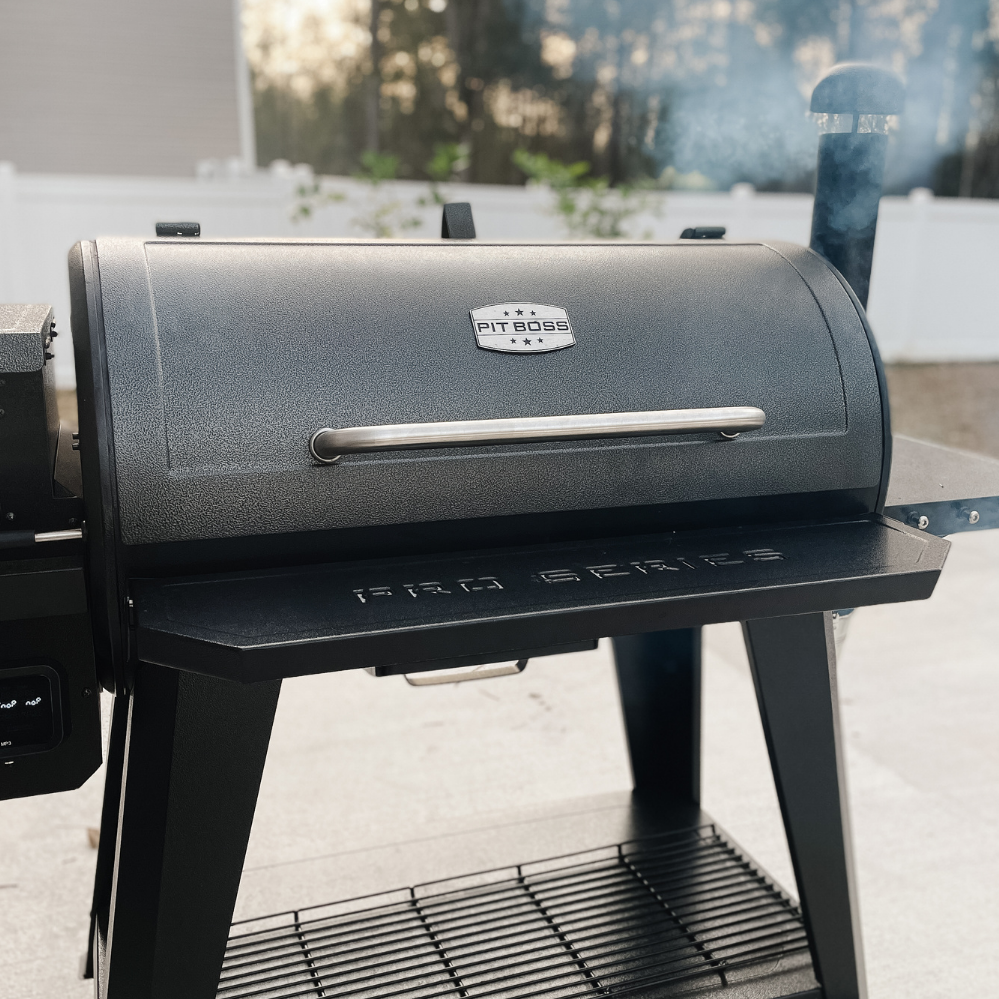 Less about us and more about the food. We want to focus on what we all really care about - smoking delicious meals to enjoy with our family & friends. We perfect the recipes, you make the memories.

What he said 👀 Our #smokedmacandcheese is up!

Air fryer pasta chips? We had to try it ourselves

Probably one of my favorite #pitbossrecipes yet! #

I can’t even make up how good these are. Fill up

Working on something new… and very sweet to shar